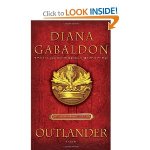 Claire is a young married woman in the 1940s, who suddenly finds herself falling into the past through an ancient henge in Scotland.  She lands in 1752 clan-dominated Scotland, in the middle of the clans’ uprising against the British.  Her first encounter is a nasty one with a man who turns out to be her husband’s ancestor, glorified in the 1900s but not such a nice guy in real life.  Her rescuers, a rough, tough, band from the MacKenzie clan, include one Jamie Frasier, a heart-throb of a man in any century.  Of course Claire and Jamie fall in love, and have a lot of great sex, and Claire is torn emotionally by her passion for Jamie and her feelings of affection and duty to Frank, her husband in 1942.  Eventually she is forced to choose between them when she is presented with the opportunity to return to her own time through the henge time-portal.   Her decision is not surprising, but I will not spoil it here.The original novel, Outlander, has just celebrated its 20th anniversary, and there are 6 further novels. Each one is approximately 900 pages and covers such a range of time and adventures that there hardly seems anything more to do, but Ms Gabaldon’s mind is still spinning and she is still creating wonderful amazing stories. Let me just say that her lovers cross the Atlantic, establish a homestead in North Carolina and get caught up in the American Revolution, along with an extended family and tons of loyal friends. The last novel, An Echo in the Bone, was published in 2011, so her legions of rabid fans are hoping to hear of a new novel in 2013.

Here are the top free Kindle Business and Investing ebooks, as of Monday, October 8 2012.  This list will be updated every week.

NOTE: These ebooks were free at the time of publication. Please verify the current price before purchasing.

1. How People Tick: A Guide to Over 50 Types of Difficult People and How to Handle Them  By Mike Leibling

2.  Life After Debt: Practical Solutions To Get Out of Debt, Build Wealth, And Radically Transform Your Finances Forever!  By Rob Kossberg.

5. Head in the Clouds: The Location Independent Office – How To Take Your Business or Job Online and Work Remotely from Wherever You Please!  by Phil Byrne and Indi Debah

Hi, and welcome to my blog.  I worked in advertising for 20 years, most of that for a large car company, and I just got sick of the rat race. Now I work at home, writing blog posts, articles and copy for small businesses and entrepreneurs all over the world. I work with several SEO consulting companies, providing copy for their clients. I have written for many different businesses, including a precious metals dealer, a recruiter for financial professionals, a financial information entrepreneur, a web marketer, and several insurance companies. I also write stock market analysis and market commentary articles for The Motley Fool and SeekingAlpha.com.

My goal is to write for you and make you look good. No matter what kind of writing you need, from a 200-word quick blog post to a 2000-word analysis, I can provide it quickly and at a fair price.

I also have been a book reviewer for years. I used to run a blog, DailyReadz, One Great Book Every Day. I had over 800 followers. I have been reviewing books and products for the Amazon Vine program for over a year.

I can be reached at khern0203@yahoo.com for further questions.